We have a new toy…

Yes, DH should have realised that he unleashed a monster when he got me hooked on the Polar Beat. The only problem I had with the Polar Beat was that I would almost always forget to bring it when I worked out away from home which sort of defeats the purpose of having it in the first place. I thought the Apple Watch would solve that problem because you can’t forget something you wear on your wrist everyday.

A quick search online for “activity tracker” and “Apple Watch” brought up a number of apps. I had a play around with the following:

Since I couldn’t have Polar Beat for the Apple Watch, I decided I just needed an app that would let me track the same states I get from Polar Beat – heart rate tracking using the Apple Watch, calorie burn, and a place to key in my distance covered when I’m on the home rower. If I got anything more, I would consider it a bonus.

A lot of apps are made with outdoor runners in mind and they’re great for that. Unfortunately, for the kind of activities I do – yoga, hiking, indoor rowing, pilates – they miss the most important part I want to record – workout intensity and heart rate. The four apps I downloaded looked promising, but only one app came out on top.

This app is probably the best looking for the four apps I checked out. It also looked very propitious with this screen shot that promised so much:

MapMyRun and Argus both had the same issues as Endomondo – you can’t track heart rate using the Apple Watch – so I didn’t really explore them too much after that. I’m sure they’re both really worthwhile apps but for my intended purpose, they failed. 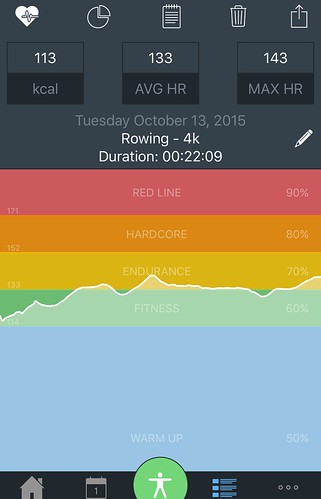 This is currently the only app that I found that could use the heart rate monitor on the Apple Watch:

By far the best thing about this app is the ability to import full workouts from your Apple Watch workout tracker. This gives you the option to leave your phone behind and still monitor your workout intensity and performance on the app later when you sync the data.