That was the end of it until I wandered back Plaza Damas years later with friends and remembered Uncle William and his bread shop. Remembering fondly how G1 used to love his bread, I decided to buy some to pack for the kids to take to school for their lunch. This was G1’s reaction when he tasted it: “Mum! This is the bread! I remember I used to have it when I was little! I love it!”

I never realised how strong an impression Uncle William’s bread left on him. Even G2 became a fast fan of the bread so we’ve been buying ciabatta from Uncle William ever since we re-discovered him again.

When MCO came around, Uncle William had to close. #FMR bought ciabatta from one of the supermarket bakeries. It was nice but it was not Uncle William’s standard.

#FMR suggested we try making it ourselves, but I was skeptical. He sent me this Ciabatta recipe from Brown Eyed Baker and I gave it a go. It was not difficult, just a lot of waiting time. It’s certainly not a recipe you make on the spur of the moment because the sponge needs to be prepared a day in advance.

It came out of the oven looking a lot better than I anticipated, but it felt very hard. If it didn’t soften, it was going to be a very crunchy loaf. Bread recipes don’t usually work well for me and I was expecting it to fail again. Aside from using the bread maker, I almost never make bread for this reason. 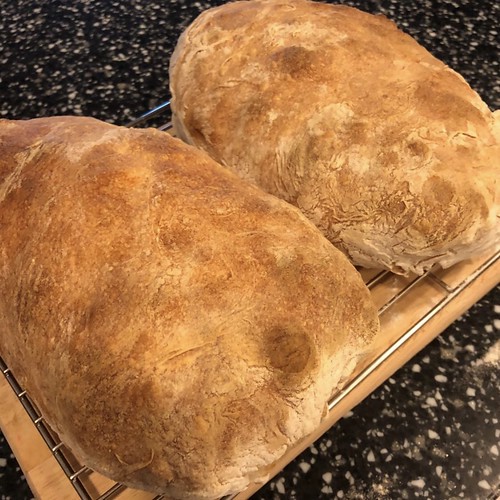 We had to wait an hour before I could cut it. By that time, the bread had softened – much to my relief. I wasn’t sure if I would ever make this again until I cut it up. It was amazing! Did I make this?

Best of all was when G2 tried it and asked, “Where did you buy this, Mum?” Even he couldn’t believe we made it! 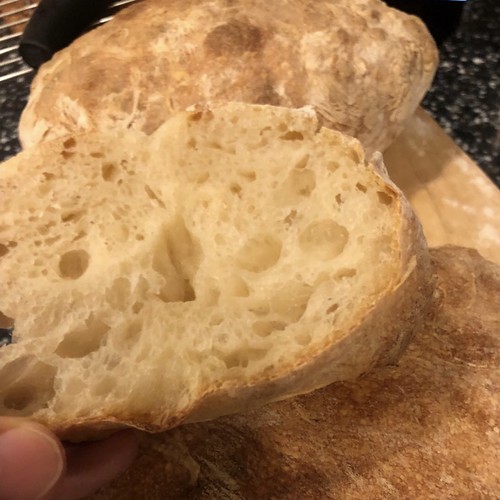 So here’s the recipe, which I didn’t exactly follow to a “t”. Clearly, I cannot read so I missed a few parts. I probably should have watched the video but I also missed that. I blame the phone – makes it harder to read. I’ve written the instructions the way I did as a reference to myself the next time I make it. For the full instructions, I recommend heading over to Brown Eyed Baker and watching the video.

We checked out other recipes, but they required bread flour. I wasn’t sure what that meant, so I looked it up.

I didn’t have rapid-rise yeast either, but the normal yeast I found in sachets seems to have worked fine. I used 1/4 teaspoon for the sponge – although I don’t know if that was a good or a bad idea. It doesn’t seem to have affected our bread negatively, so.

1. Make the Sponge: Combine the flour, yeast, and water in a medium bowl. Cover the bowl and let stand at room temperature for at least 8 hours or up to 24 hours. 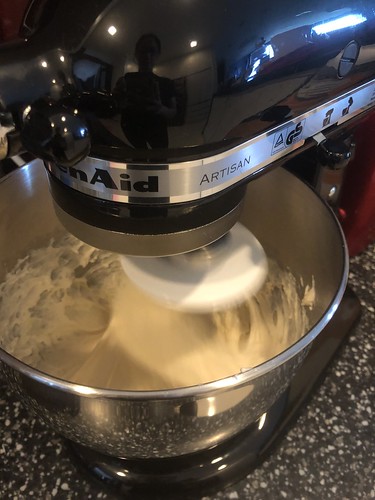 2. Make the Dough: Place the sponge and the dough ingredients (flour, salt, yeast, water, and milk) into a mixing bowl. Using the dough hook on a stand mixer, mix on low speed until combined (about 1 minute). Scrape down the bowl and paddle as needed. Increase the speed to medium and continue mixing until the dough becomes a uniform mass that is smooth and shiny (about 15 minutes). The dough will be very sticky.

Transfer the dough to a large bowl, cover with plastic wrap, and let it rise at room temperature until doubled in size (about 1 hour). 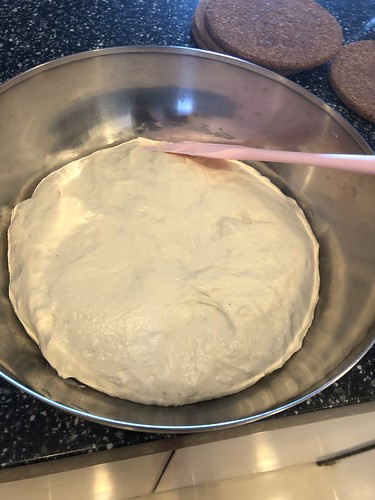 3. Grease a rubber spatula with butter and fold the dough over itself by gently lifting and folding the edge of the dough toward the middle. Turn the bowl 90 degrees, and fold again. Do this a total of 8 times.

Cover with plastic wrap and let rise for 30 minutes.

4. Repeat step #3, cover with plastic wrap, and let rise until doubled in size (about 30 minutes).

5. Preheat the oven to 230 degrees Celsius. They used a baking stone but I don’t have one so I just used a regular oven tray.

6. Cut two 12×6-inch pieces of parchment paper and dust liberally with flour. Transfer the dough to a floured work surface, being careful not to deflate it completely. Liberally flour the top of the dough and divide it in half with a bench scraper. Turn 1 piece of dough cut-side-up and dust with flour. With well-floured hands, press the dough into a rough 12×6-inch rectangle. Fold the shorter sides of the dough toward center, overlapping them like you would fold a letter in thirds, to form a 7×4-inch rectangle. Repeat with the second piece of dough. 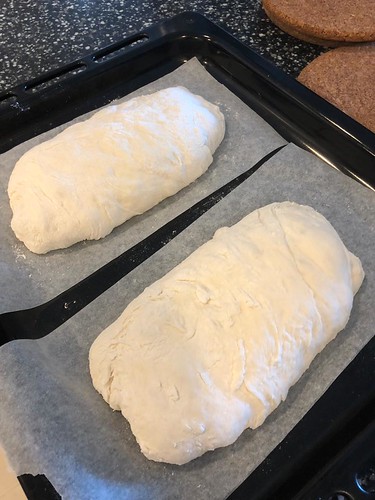 7. Gently transfer each loaf, seam-side-down, to the parchment sheets (which I laid out on the oven tray so I wouldn’t have to move them again later). Dust with flour, and cover with plastic wrap. Let the loaves sit at room temperature for 30 minutes (the surface of the loaves will develop small bubbles).

8. Using floured fingertips, evenly poke the entire surface of each loaf to form a 10×6-inch rectangle; spray the loaves lightly with water. I didn’t have a spray bottle so I used a brush to flick water onto the dough.

During the first 5 minutes of baking, spray the loaves with water twice more. Continue baking until the crust is deep golden brown – about 25 minutes.

9. Transfer the loaves to a wire rack, discard the parchment, and let cool to room temperature (about an hour) before slicing and serving.