According to Surviving Yucatan:

Unfortunately, they don’t say much about what that might translate to in terms of exposure to other infections. Regardless, whatever it means, we’ve decided to bolster his immune system. I’ve adopted a mix of Eastern and Western medicinal remedies.

This is a soup packed by Koay Chee Cheong. I can’t read the writing so I have no idea what it’s called or what the ingredients contained within it are. I only know that it’s for “energy and boosting the body’s immunity” so we’re going to give it a go. Here’s a picture for those who can read Chinese: 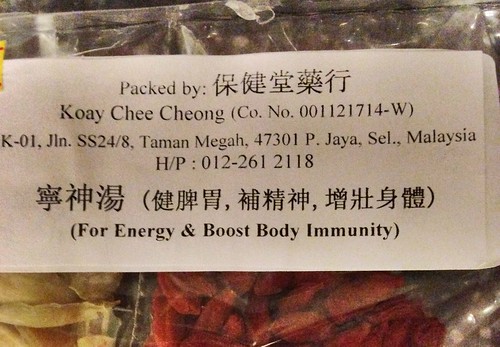 I don’t really know how to recognise the herbs very well, but these are the ones I do know: goji berries and dried longans. They also have what I think looks like Chuan Xiong, Lily Bulb, and Chinese Yam. There are a few more other herbs, unfortunately, I haven’t a clue what they are. If you recognise them, please leave me a comment.

One thought on “Chinese Herbal Soup for Energy and Immunity”