Starting an exercise program is easy. Staying on it is the hard part. So how can you make sure you can stick to it?

They say that if you do something for three weeks, it becomes a habit. I don’t know about the validity of three weeks, but I do agree if you can repeat a routine enough times it does become a habit. How long it takes depends on you as the individual and the habit you are trying to create. Certain things are easier to make into a habit – like drinking a glass of water in the morning after breakfast, and other things are harder – like exercising.

However long it takes for you, repetition is the key. If you aren’t repeating it enough times a week, it won’t ever become routine. So you have to do what you can to make it as easy as possible to make it routine…

Doing something fun is always easier to do than something you don’t like – you will look forward to doing it and you will probably initiate doing it. Whoever said you have to suffer through your exercise in order for it to be effective was wrong – the “no pain, no gain” philosophy has been debunked. Besides, if it is such a chore that you find excuses not to do it, then it defeats the purpose of getting onto an exercise regime in the first place.

One way I try to maximise on efficiency is to run around with the kids. There are so many pros with this one that it’s a no brainer.

My son loves getting on the scooter for an early morning scoot around the block before school. I used to run after him – but I have to admit that wasn’t nearly as fun. 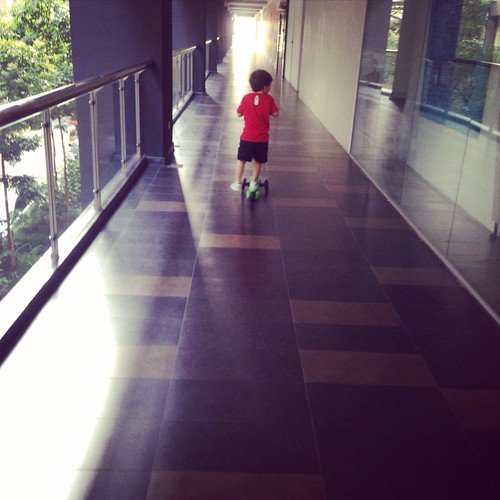 Then I got my own scooter – OXELO Town 7 XL Susp Scooter – and we’ve never looked back.

It’s a tough call who has more fun – my son or me.

Sure, I don’t burn as much energy as I would if I did a proper workout at the gym, but at least I can be sure that I’ll still be doing this a month down the track. Even if my enthusiasm wanes, my son will be hold me to it. Hard to say whether I could have that kind of commitment with the gym.