Volleyball is another wall at Batu Caves. There’s a pretty good description on how to get there on rockclimbing.com, alternatively, you can check out the map drawn by Wira Consult. I’ve also drawn my own map (below), so take your pick…

Volleyball got it’s name because there used to be an old volleyball court at the base of the crag, but that has long since disappeared. Also known as “The Dump”, Volleyball became a rubbish dumping ground for some rather unethical companies.

There used to be an old guy staying in the area. He did a great job of cleaning up the place, however, I think he might have been fighting a losing battle against the rubbish dumpers. I haven’t been back there for a while, so I don’t really know the state of the wall at this point.

All I can remember is that the wall is fairly flat and smooth, although some of the routes are quite powerful. The wall is often in the morning sun so climbing in the late afternoon is generally preferable. There are 14 routes at this crag, all mostly fairly short, but bring along your 60m rope and it should be adequate even the longest routes.

Back when I was working this area, I collected all the information I could find on the crag from the internet, including the two topos below. Unfortunately, I cannot locate the original site where these come from but I thought they were extremely useful. Kudos to the person who did them. There are three routes missing from these topos, but you can find them at rockclimbing.com or read about them from the route descriptions that accompanied the photographs.

These are the route descriptions from left to right:

There is also a route on the left of the routes marked on the photos (A tribute to Rakyat), which after a bit of a dirty start, develops into a fine and strenuous outing at about 6c. Bolted by Akmal, January 1999.

A route further to the right called Why you so like that has been bolted by Akmal and Yen (not yet climbed clean as at July 1999).

When we first started working on this area, we were pretty much into the swing of climbing. We were still 6A climbers pushing on the barriers of 6B, but we were a lot more focussed on the climbing now. As a result, there was also a lot less posing for the cameras, which is also why I have a scanty three photos in my collection for Volley ball.

This is a photo of Thin Man working the 6B route called “Tiger”. The stalagtite you see in front of him was the same one I crashed into when I took a whipper while projecting this route. The knee injury was my first serious injury from rock climbing and it put me out of commission for a month! 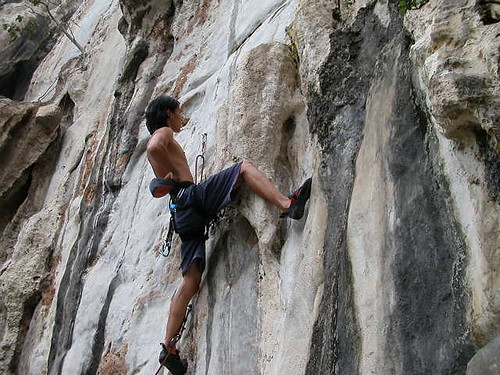 That’s me on the same route. I think this was after the first fall – which I came out of unscathed. It was the second fall that sent me home packing. I also cracked the casing of my one week old mobile phone because I forgot to take it out of my pocket – duh! The left knee was throbbing so bad, I couldn’t press the clutch in my car so I had to swop cars with my brother for a week. 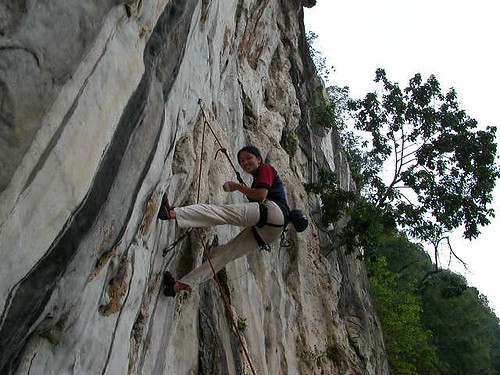 This is Joe, a guy who was travelling through the area. He stopped by the Summit climbing gym looking for people to climb outdoors so we told him he was welcomed to climb with us. He put away “Tiger” like an entree, exhibiting all the finesse and grace of a superior climber. It’s such a shame we never got to see him climb anything else. 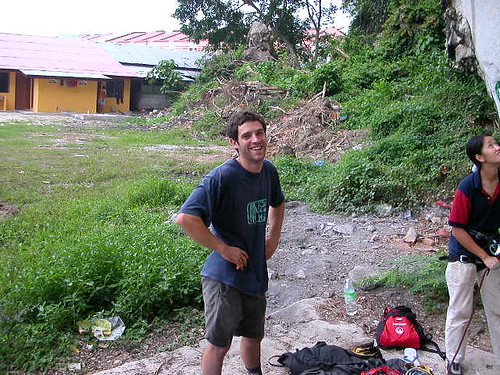 From the picture above, you’ll notice that this was probably one of Volleyball’s cleaner days. The route called “A Tribute to Rakyat” is hidden behind those bushes in the back ground.